XCU is a new generation of polymer-coated, sulphur coated urea (PCSCU) and it has the highest Nitrogen content (43 %) of any sulphur-coated urea (SCU) on the market today, so the landscape and lawn care professionals can treat more area with less product to control costs.

XCU is unique because it´s the only PCSCU with inner polymer layer, which consists of a thin, cross-linked polyurethane film that encapsulates and protects the urea granule. XCU´s outer layers consist of a thin coating of elemental sulphur and a polymer wax, which work together to protect the polymer coating. This unique coating results in less product breakage, what means less quick release, less surge grown and longer feeding. The other important result of this unique coating is less nitrogen „lock off“ than other PCSCUs what means you get the nitrogen you are paying for in the expected time frame.

Most fertilizers release Nitrogen too quicly for turf and plants to use it all. XCU provides just what the plant needs for a longer period of time. Thanks to unique, durable coating XCU provides gradual, consistent nutrient release so one application provides up to 10 weeks of green, healthy turf. XCU´s superior (see figure) release characteristics and highly efficient feeding mean you are getting the maximum performance and results, saving significant costs in your fertlizer budget.

Comparing to SCU XCU´s release curve is not parabolic but very close linear that means very gradual and steady nitrogen release up to 10 weeks.

* The term „Lock off“ is used for cases where part of the fertilizer granules typically urea is locked up in a membrane so strongly that in this part of the granules will not release the nutrients contained in the desired timeframe, in extreme cases this portion of nitrogen with which was the primary fertilization plan calculated, is not released, and remains completely inaccessible for the plant, or releases over a much longer time horizon and therefore the plant does not have enough nitrogen and suffering. 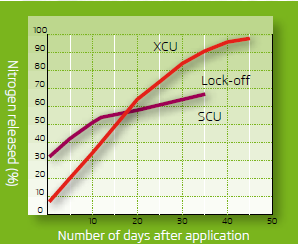 Methylen urea (MU) is special Slow Release Nitrogen obtained through the condensation of urea molecules with formaldehyde under strictly defined conditions, forming polymer chains of different lengths.The nitrogen release of MU is determined by the design of the polymer lengths and the ration between fast acting nitrogen (Water Soluble Nitrogen) and gradual release
nitrogen (Water Insoluble Nitrogen). Shorter chains are more soluble and readily availbale from microbial action. On the other hand, longer chains are more insoluble and require more time to be digested from microbial action in the soil.

Unlike other Controlled Release Nitrogen sources, the bioavailability of MU mainly depends on the soil micro-organism activity and mineralization action. MU is a source of organic carbon (life energy) and nitrogen (nutrient) for the soil micro-organisms. Using MU you feed and develop the beneficial microbial population responsible for the natural nitrogen mineralization process (breakdown of polymer chains into simple units).The conditions controlling the root growth and activity of the plants, temperature and humidity, are the same as those that regulate the microbial activity. This means that MU nitrogen is made available when the conditions for root activity and growth are optimal. The release of Nitrogen is in sync with crop needs.

In comparison with coated products, the slow release characteristics of MU products will not be lost if particles „are damaged“ or „are broken“ during shipping and handling. A gradual release of nitrogen is still assured, without nitrogen loss or dumping.

Furthermore, MU protects groundwater from nitrates and keeps nitrogen originated from fertilizers in the soil profile providing uniform and sustained feeding even in hot weather and heavy rains. This is because the Nitrogen release in MU products is not directly dependent only on temperature or hydrolysis, but it requires the microbial activities as well. MU present in some fertlizers from Fenix line is also a source of slowly available water soluble Nitrogen, a meaningful distinction from looking only at water insoluble nitrogen.